Leaking is the big issue for softgel manufacturing and softgel quality during shelf life, ther are a lot factors for softgel leaking or slowly leaking in packaging:

Those leaking happens many especially for the softgel capsule with paste suspension fill material mixture, typical exmples are bee propolis softgel, multivitamin and multi mineral softgel, chinese herbal extract powder or medicine with PEG supporter, soy phospholipid softgel (soybean lecithin), also tapioca starch veggie softgel etc., more seam can help for no leaking, this SEC new patent max seam die roll can greatly enlarge the softgel seam rate both on leading and trailing. Even there are existing similar technology from other countries suppliers, this max seam die roll from SEC improves the inefficient sides on the world current technology and makes it almost perfect on the max seam on various fill mixture materials, which have been tested by so huge amount softgel manufacturers in China and some overseas in the industries of supplement and pharma. Now its the good chance to introduce to the world (SEC only introduce the stable technology to overseas market after enough testing and users feedback).

Here taking typical exmple on the cranberry-lutein ester-beta carotene softgel capsule, this is the typical suspension softgel, its fill is composed of cranberry extract powder, lutein ester and natural beta carotene oil. Composition of anthocyanin (the active ingredient in cranberry extract powder) and lutein ester would decrease easily by the temperature, storage etc., quality controls during production and encapsulation shall be well noticed and controlled for their composition stability and so for softgel product quality stability.

Fill material mixing preparation process can be mainly 3 types, simply mixing, heat mixing, heat homogeneous emulsifying, according to the softgel formula ingredient list and the feature of ingredient, working sequence of each type has big difference in their operation procedures. (For example when lutein mixing with L-canitine for softgel, because lutein has small fiber, its not soluble in oil, and only available to emulsify into oil, and with enough emulsification; L-canitine has big moisture absorption, its dissolved when big humidity, and melted into lumps when high temperature, its preparation shall be in environment low humidity low temperature; they shall be separately emulsified, after well treating each, mix them together until even.)

Fill material for this cranberry - lutein ester - beta carotene softgel belongs to the heating homogeneous emulsifying type, which can help to have the active ingredient of each composition even and better softgel seaming. By dispersion the  suspension agent, after decreased temperature and input ingredients according to sequence, mixing until the mixture even, then to have milling and homogeneous, make the final finished mixture fine to 120 mesh.

Drying in tumbler dryer or drying tray are the most often two types currently, choose the suitable drying type according to the softgel type and workshop structure, for example suspension softgel when not well encapsulaed is not recommended to have drying full in tumbler dryer; tapioca starch veggie softgel is better drying more on tray etc., drying temperature for this cranberry-lutein ester-beta carotene softgel is 18-30℃ and humiidty 10%-35% according to manufactured batches experiences, on the basic of well preparation and softgel encapsulation, its higher efficiency drying in tumbler dryer. (Because leaking happens very often by almost all possible sides improved during encapsulation but the not well treatment preparation of fill material mixture). According to the operation, put the oil absorption cloth in tumbler dryer basket, or use the softgel polishing equipment to have separate polishing, making the softgel appearance bright and no oil.

There are still required humidity and temperature in room of inspection and packaging, 18-26℃ temperature and no more than 65% humidity are applied. Its recommended to not have high temperature and high humidity, which would have softgel shell absorbing water and softgel becomes soft, effect the softgel appearance.

Accordingly there are key quality controls for this cranberry-lutein ester-beta carotene softgel:

During production process of this softgel, if improper control on the wedge temperature, gelatin mass temperature, gelatin ribbon cooling drum temperature during encapsualtion softgel shaping, softgel would have leaking and deformation, and if too high temperature of fill material mixture, it effects the active composition of anthocyanin in the softgel.

During encapsulation, besides the temperature control and keep stirring, its storage shall be avoid light and seal. According to the fill material requirement, its also good to have high pure nitrogen protection during the seal storage.

On the base that softgel formula is confirmed, its pH value will not change mostly. While the water content in product itself during storage process would also lead to the active composition decreasing largely. This requires when during drying process, to control drying temperature not high, at the same time to have drying time not too short, too fast drying time would have phenomenons of fake dried or actually not dried, normally the qualified dried softgel shall have water content on its softgel shell 8-12%.

According to tests on the same test methods, after the quality controls, active composition of anthocyanin and lutein ester are quite stable.

From this example, its obvious to see the effect factors, it has many sides, generally for suspension fill material, the softgel quality problems still occur no matter if max seam die roll is applied if the fill material is not well or correct treated; same that for softgel shell, a lot quality problems happen if the gelatin mixture is not well melted/cooked. While for these special feature of fill material or gelatin mass, max seam die roll can help to compensate the insufficient of material/gelatin mass treating preparation or strengthen to ensure softgel quality during whole shelf life in varous environment even its confident with good material/gelatin mass preparation. 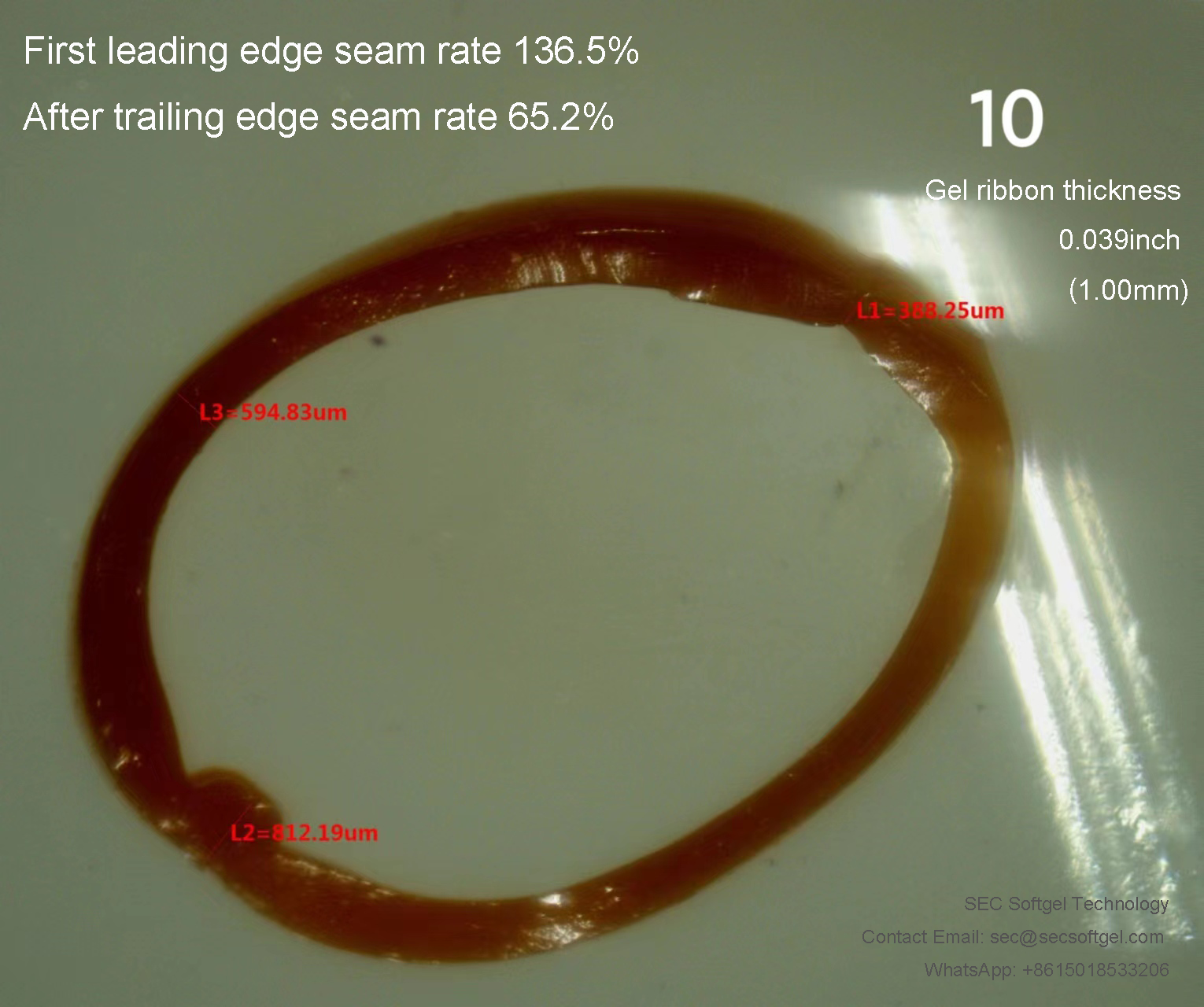 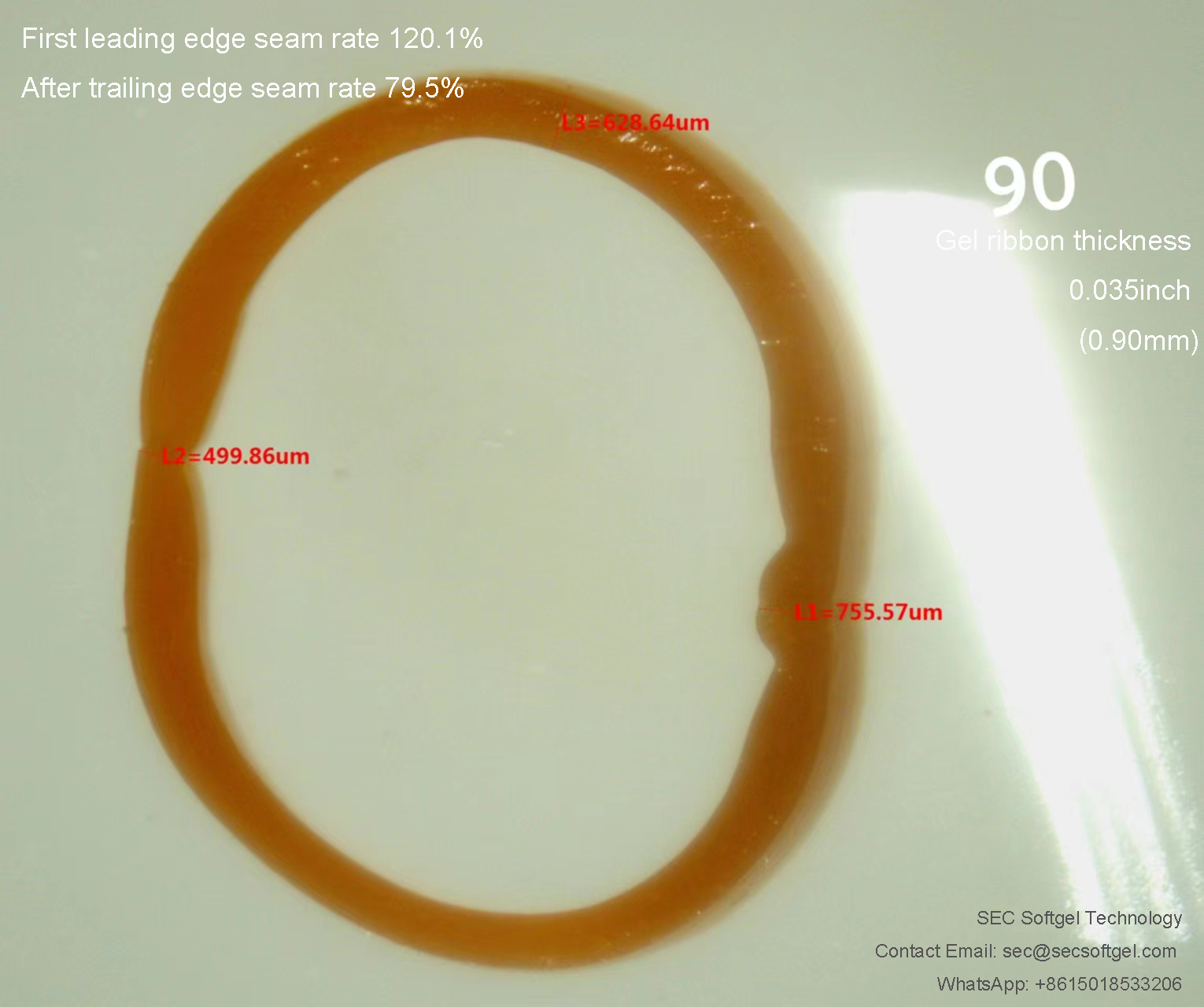 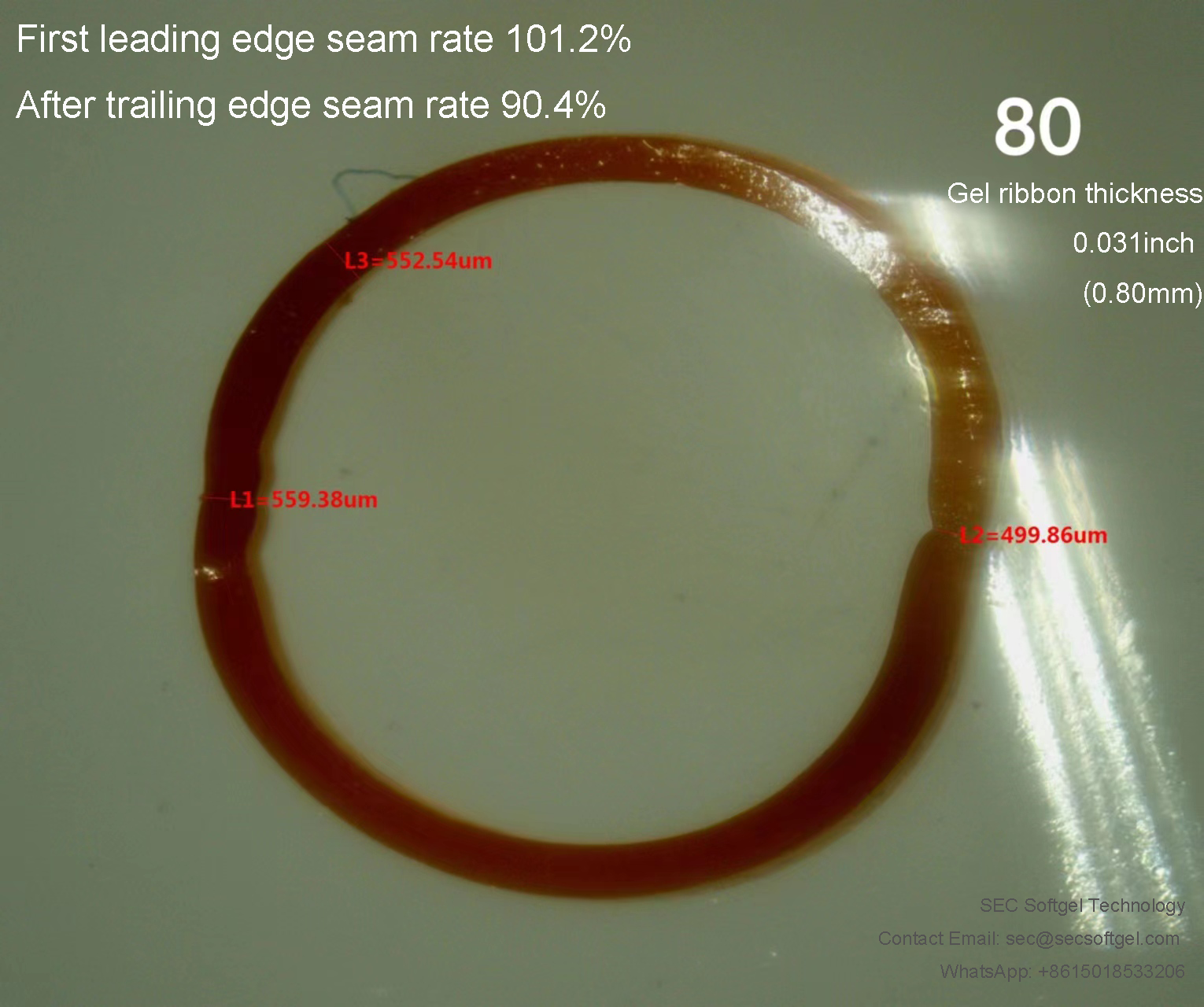 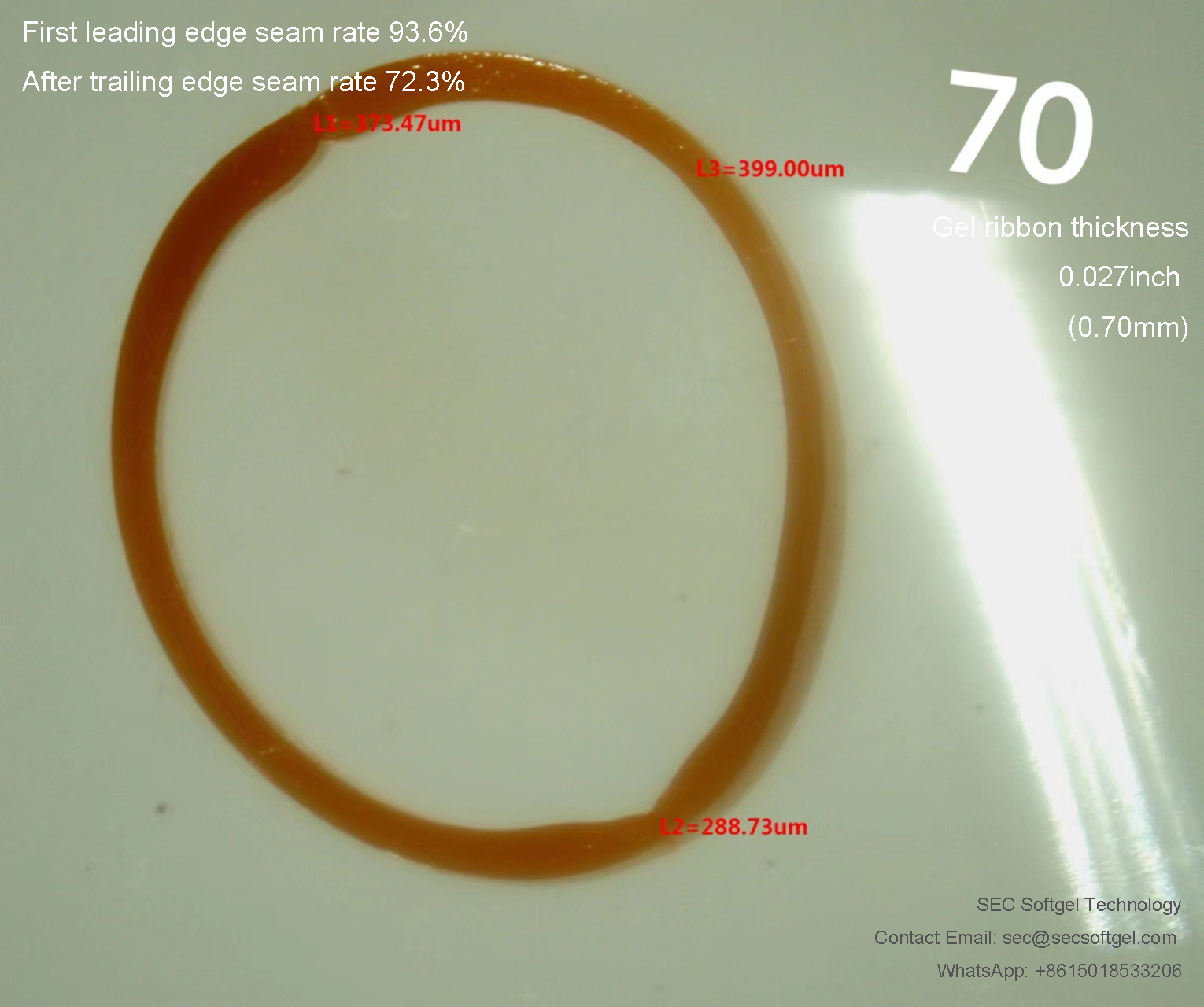 As above seam rate for the manufactured cranberry-lutein ester-beta carotene softgel on the SEC max seam die roll, its feedback by the user that its the biggest seam that they have been made even this shall be the most skilled softgel production team in China.

Leaking happens mostly on the trailing edge, higher than 60% and even high to 90% of the trailing edge can greatly help for no leaking on various softgel formula, at the same time providing valid accordance for softge leaking analysis.

SEC the first softgel service platform in China with histroy origin in 1986, we are manufacturing and supplying the know-how operation, technical guidance and training, and one stop solution for reasonable matching between die roll and fill mixture material, fill material feature analysis support, onsite encapsulation, for your easy softgel production with better softgel quality and appearance.

ꄴPrev： Nothing
ꄲNext： Why do your manufactured starch veggie softgel leak, series 1 of analysis from gel mass transferring
ꁲ